In the centre of Stonehargh stood a palace. It was unusual in construction. The outermost wall was the grandest and most beautiful, rich with ornate ironwork and painted coats of arms. The gardens beyond were broad and well-kept, filled with exotic plants. The towers of the central building had a more functional look. They were well made, but in a military style. A messenger, just arrived from the warfront, showed her ring at the gate and was escorted along the long, cold corridors by two guards. Arriving at the great stairway leading into the heart of the palace, they surrendered her to the care of two other guards in huge suits of oiled metal armour. With slow, ponderous steps they led her on to the door of the throne room herself. There two more guards stood in crimson tabards and gold armour. They were festooned with layered cloaks, plumes, embroidered sashes and ornamental weapons. They opened the throne room doors before the messenger.

Within the throne room it was almost dark. In the warm glow from four hanging braziers the messenger could make out the steps of a carpeted dais. Upon every step were treasures, weapons and offerings. The air was thick with a dozen perfumes. The space could have seated a hundred courtiers, but there were none. The messenger bowed her head at once before the tall figure in the throne. She unrolled the scroll, but had no need of it to recall the message. The war proceeded well and the forces of Vaught had been driven back across the river to the South. Regrettably, half a troop had been lost in the fierce fighting, but the enemy had lost twice as many.

Imperiarch Rojan, leader of the unified army of all humankind, said nothing. Why, after all, should he speak with a humble messenger?

The messenger repeated her message later to a functionary of the court. He was a quiet, dour man and he recorded every word in a ledger even though the scroll bore them as clearly. And a curious daydream came to the messenger then as she listened to the scratching of the pen. When she had knelt before the throne, had the Imperiach truly been there? She could recall nothing of his appearance, nor even his clothing. It must have been opulent, she supposed. Perhaps it was of ceremonial crimson, made from velvet? And she had seen engravings of the crown he wore. So now, she supposed, she had seen it for herself.

A scroll with new orders was given to the messenger the next morning. With a new horse, she began the long ride back to the warfront. Her mission had been a great honour. She could regale her companions with tales of the Imperiach. He was tall and strong. He offered kind words of thanks to her, despite her humble station. He was magnificent in ceremonial crimson, with his greatsword at his side and his crown upon his head. Long live the Imperiach! 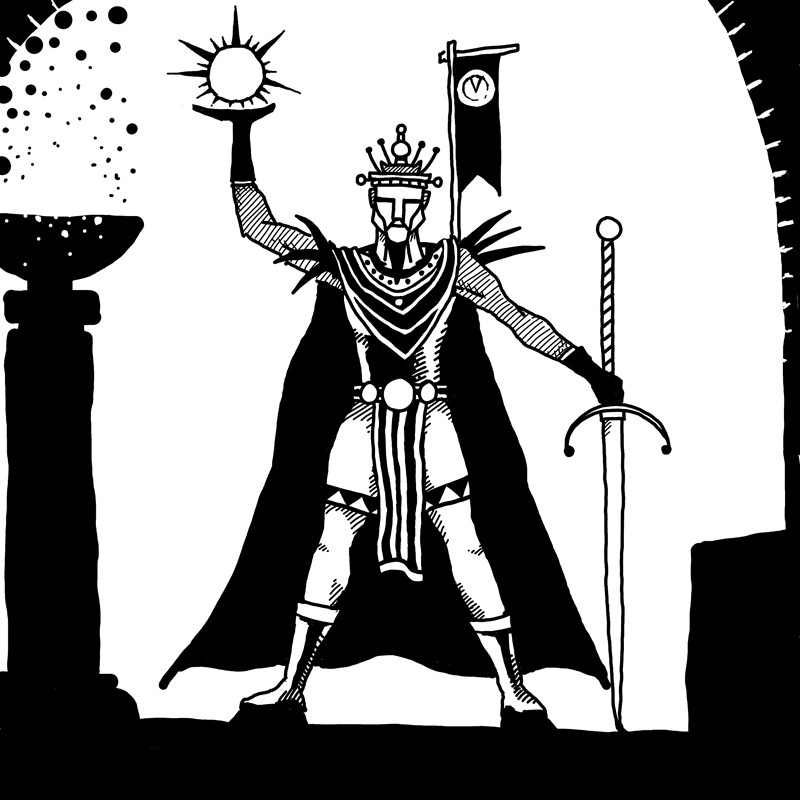 In times long forgotten during the Mythic Epoch there was a vast war, so great that all of humankind took up arms for their very survival. Their ruler and champion, Imperiarch Rojan, took up arms as a young man and fought tirelessly throughout his life, never knowing peace. And he lived a far longer life than most, sustaining himself by sheer force of will and the determination to achieve victory. Despite this long struggle his foe, the Gurak Vaught, was never defeated. Vaught was a beast of a man, seven feet tall and as strong as a bull. It was said he had two hearts and could never tire. When a hundred wounds and as many years forced the Imperiarch to retire from the field he continued to guide the war from his palace in Stonehargh. Over time he became the ruler of the city and all the lands around, despite the fact that it belonged to a kingdom with its own royal family. The king was declared an outlaw in his own nation, to be hunted down and arrested if he dared show his face.

The Imperiarch at some point took a wife. Her name was Heria of Stonehargh, the wise administrator of the city, who understood more of the Imperiarch than most. It is said she truly loved him. She had two children by him also. Many years later, her daughter Calypso went on to rule in the Imperiarch’s place, though her regime was very different.

Always deeply involved in the affairs of the Imperiarch was the mysterious Guild of Reflections. They were the keepers of a secret truth: that the Imperiarch was much older than the stories claimed and had in most senses died centuries ago, as had Vaught. Such was the intensity of their endless war that it could never cease and the need for their leadership sustained their existence. So it would remain for eternity.

The question the Guild of Reflections never considered is: did Imperiach Rojan ever exist? Heria existed and although she lived an exceptional life she was ultimately human. Little is recorded of her son. Calypso, her daughter, was a gifted wielder of secrets and appears in several stories. Stonehargh is a real city and she is remembered as one of its earliest rulers even though no records from that time survive. In the light of these facts it seems probable that Rojan was an image - albeit an enormously powerful one - and it may well be the case that many of those with image blood in the known world are descended from him. Certainly he took many lovers before marrying Heria.

Although the Guild of Reflections is lost to the Mythic Epoch, if any of their knowledge survived it might represent one of the few ways for a scholar to understand something of the true nature of image blood and the sorceries it unlocks.
Collapse