Ori the Younger stood a while in puzzlement while butterflies perched on him and flew around him and drops of water from the canopy above soaked his hair and jacket. He remembered plunging into the freezing waves as his ship broke apart around him. He remembered chasing through the Skasport docks, helping a customs warden to catch a fleeing smuggler. He remembered gentle, laughing sex with a woman twice his age. He remembered the pain of a crossbow bolt grazing his left arm as his convoy was attacked.

None of these were his memories. Suddenly Ori was dragged forcibly backwards.

“Don’t breathe the scent, kid,” the Bosun shook him a little and peered into his eyes, “only a fool samples the merchandise, eh?” 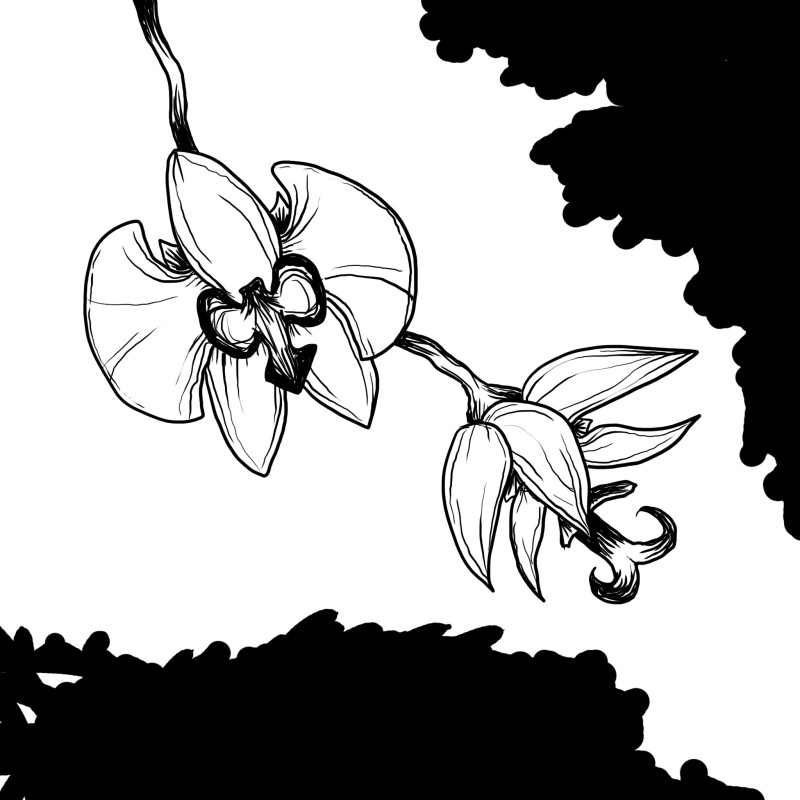 The archipelago where the Six Castles stand was formed by long ago volcanic activity. The main islands have been home to human communities since the mythic epoch, but it was not until relatively late in the age of exploration that a further island was mapped more than a day’s voyage to the South. The island of Baratheen consists entirely of the cone of an extinct volcano that rises above the waves of the Southern ocean. The lower slopes are rocky and thick with seaweeds and barnacles. The rim of the crater is likewise rocky, but the rest of the island is covered with plants, many of which are found nowhere else in the world. Within the crater was once a lake, but over millennia rockslides and fallen trees have formed islands and land bridges across parts of the lake which networks of tree roots have knitted together.

One of the rare plants which can be found on the island, growing along the root bridges of the crater, is a species of orchid with striking flowers of white, yellow and blue. The perfume of these flowers has a strange effect upon the mind and senses. Explorers have reported acquiring the memories of others nearby as though they had experienced them themselves. Others tell of hearing voices in a language they didn’t speak, although whether these were imagined or real they never determined. In one account, a woman’s vision was distorted in peculiar ways that enabled her to see around corners, including seeing more than a hundred paces through the jungle as though the trees were no obstruction at all.

Samples of the orchids were taken for study by scholars and alchemists on multiple occasions, but no conclusive results were ever reached. This was in part because the orchids do not grow well away from Baratheen and so sooner or later stop flowering and eventually die. Another problem was that test subjects were not good at accurately reporting their experiences due to the effects of the flowers. In cases where alchemists decided to inhale the perfumes themselves, their notes ran to many pages but contained only incoherent glimpses of strange dreamscapes and barely plausible experiences.

Distilling the perfume into a more readily portable form than the flowers themselves is possible, but the resulting essence is still not very long-lived.
Collapse