Before axes could be set to the great gate, it was hauled open and a company of horse sallied forth, followed by two lines of pike to hold the gate until their return. They charged the enemy ranks with spirit, knowing that the day would be as good as won if the enemy could be made to fear approaching the gate again.

It was an ill-fated charge. Behind the enemy axemen stood a hulking statue of oiled metal. It had the horns of a bull and wide skull face with staring eyes the size of a man’s head. From within came a bellowing that brought at once pain and dizziness. The muddy plain before the gate folded itself into sickening spirals and the horses and riders fell about in disarray. There was nothing to be seen but whirling motion, the ground soon slick with blood and the air filled with shouts and roaring. The statue moved, then, though none could set eyes clearly upon it. It was amongst the cavalry, then it was amongst the pikes, then it stood in the castle courtyard as smoke and bricks tumbled about its hooves. 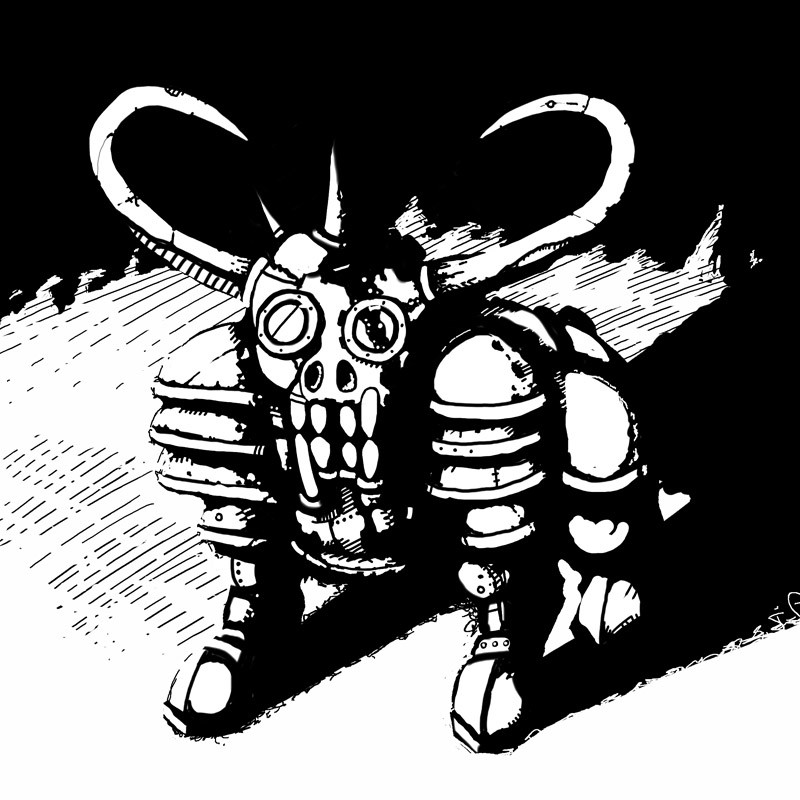 The formation of the Gymondan Empire was a long drawn out process that was to begin with primarily by way of military expansion and later by a sequence of treaties designed to dispense with the need for conflicts whose conclusion could never be in doubt. The critical battles of the early wars were in many cases won at a high cost both in human life and in terms of the sorcerous pacts signed by the Dukes of Guenkhan. One such resulted in the creation of the Brass Gorgon War Machine, a fearsome alchemical construct designed to render the Duke’s army unstoppable even in the face of superior foes.

The Brass Gorgon War Machine was used on only three battles before the Duke was temporarily forced to withdraw by civil unrest in his own lands. It was then stolen and taken to the far South. The thieves were allied to no faction in the war, but recognised the priceless nature of the artefact. They hid it in a ruin to the East of the independent city of Relgen Tower, but were themselves killed before finding a buyer.

To lift the Brass Gorgon War Machine would take ten strong people as well as strong ropes and poles. However, it is able to move itself when activated and it can be activated without any need to harm those nearby. First a fire must be lit inside and then a sequence of verbal commands issued in Gymondan. Some arts may allow the command of the Machine without a need to know the commands. For example, an alchemist of the Lossanbrandt might be able to devise a way to do so. Also, various other magical means could be used, such as Image sorcery.

The military capacity of the Machine cannot usefully be quantified. An opponent who flees swiftly upon its activation might escape. An opponent who hides might also survive, although the experience would stay with them ever after. A well prepared sorceror standing against the Machine might have some chance of quenching the fire and thereby deactivating it, but this would be a terrible risk and only to be undertaken if there was clearly no alternative. To stand against the Machine whilst it remains activated would be a feat beyond even the mightiest of champions. A few great powers might do so, but such beings do not involve themselves in the wars of mortals.